Want to know what this fabled clock looks like brand new out of the box? Want to see where you could have ordered one in 1967? This is the page you need to be on!
Here are some pictures of a brand new hansom cab lamp clock in a box, found on an auction site, where you can see the box and instructions that came with it. 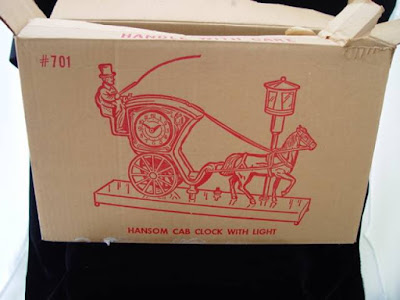 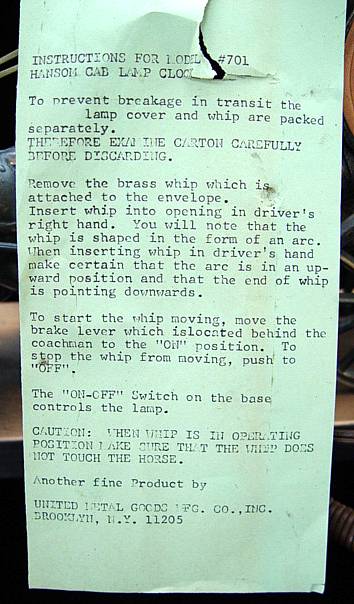 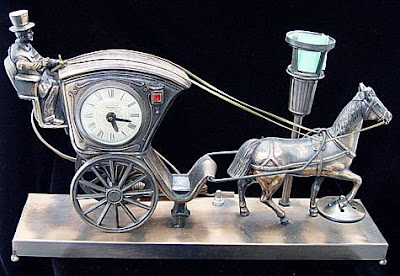 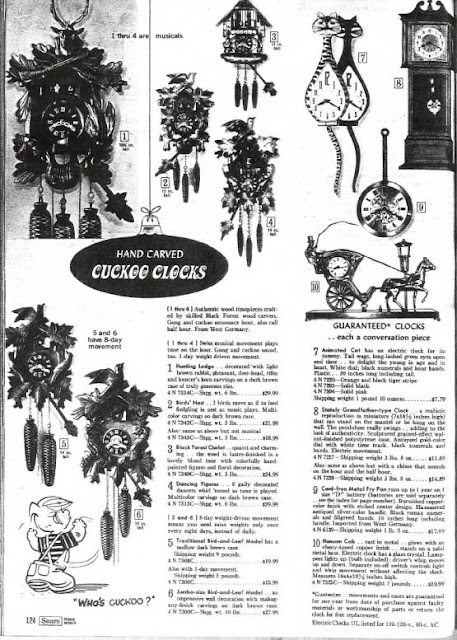 My neighbor, the Rascally Lascar, and my companion, the good Carter, are both people who enjoy the value of one’s own home. A secure haven against the outside world, a place of calm and simple pleasures, a world of one’s own making. And while I have it in me to enjoy that easy environment, there is always something in me that can’t say “no” to the call of adventure. And in Keefauver’s world, one of those calls always comes from my friend Hobbs, the Maniac Collector whom I share this site with.

This weekend found the intrepid Hobbs headquartered near Midway Airport in the Chicago suburb of Cicero. And while Chicago has never been in my comfort zone (anything past the Des Plaines exit feeling somewhat like entering a place as foreign as Eastern Europe to my simple downstate heart), I answered the call and drove up on Saturday morning, with no solid idea of what my friend intended for us on our latest adventure.

When I got to Hobbs’s lodgings, I discovered that we were not to be alone on whatever expedition he had planned. He introduced me to Philip Cunningham, an enthusiastic young native guide and fellow alumnus of the Double-Barrelled Tiger Cubs of Champaign-Urbana. (“Young” being by relative Sherlockian standards – he’s in his forties.) Philip volunteered to drive us and sealed his Sherlockian credentials by introducing us to his hansom cab clock, seat-belted into the back seat of his van.

Somehow, in the strange inner workings of Sherlock Peoria, we had actually gathered the first field trip of Hansom Cab Clock Club members (three being a quorum, I suppose) to go photograph one of Don Hobbs’s prized “Sign of the 4” state highway markers. I suggested to Don that he form a society of those people who had traveled with him on any of his assorted highway marker outings. It only seemed prudent, I realized later, as the Hansom Cab Clock Club’s purposes lay elsewhere, and I would hate for us to come to cross purposes, should The National Hansom Cab Clock Club Museum turn up in the opposite direction of Highway 4 in some future trip!

By now, the new visitors to Sherlock Peoria are apt to be asking themselves, “What does all this have to do with Sherlock Holmes?” Here’s the quick version: Hansom Cab = Sherlock Holmes’s vehicle of choice. Highway 4 sign = “The Sign of the Four,” the second Holmes novel. The long version runs more like this: there is very little in this world of ours that doesn’t have something to do with Sherlock Holmes if you look hard enough. And we Sherlockians like to celebrate the Sherlock-ness of all things.

Anyway, off we rolled with Philip as our genial driver, bound into the wilds of Northern Indiana to find the Indiana Highway 4 for Don’s ever-growing collection. After an hour of delightful road conversation and discovering that our new friend was a solid Sherlockian and entertaining fellow, we found ourselves in La Porte, Indiana at a junction that declared itself to be the end of Highway 4.
It seemed like picture time to me. But Don, having become a connoisseur and artist in the ways of highway sign photography, held out for a better sign. On we drove, out of La Porte and on to Fish Lake, about ten miles away. We must have passed three or four more Highway 4 signs, and I was starting to feel like I was waiting on Goldilocks to pick her porridge bowl. But I tried to still my inner crank as much as possible (Must we all get crankier with age? I seem to be battling it more every day!), and soon my friend had found a shot that met his basic criteria.

We drove back into La Porte for a round of celebratory antiquing and lunch. I was the most successful in our shopping, finding a nice little edition of Winwood Reade’s The Martyrdom of Man that I hadn’t seen before for $1.50 and a still-in-its-shrinkwrap Sleuth game from the seventies for $4. We also saw an unpainted Sherlock Holmes bar statue that hadn’t been priced and a gorgeous ceramic hansom cab bar statue for Old Tyme Lager that was $200 – a price too steep to be starting a new hansom cab club with!

We had lunch at King Gyros, a place recommended by the antique store owner, which served some great gyros and fries combos (we hesitated on ribs so early in the day, but they smelled great). Then it was back to Don’s lodgings in Cicero. He and Philip had to clean up for the Hugo’s Companions dinner that evening. They asked, of course, why I wasn’t sticking around for it, but as I mentioned earlier, Chicago and me, we’ve just never found our happy place.

As I headed down I-55 and passed the Des Plaines exit, the plowed earth, spring greenery, and wide-open skies opened up before me and I knew I was back on home turf. Sure, the day’s events might have not been much of an adventure to an extreme sports enthusiast, a explorer of other continents, or even a resident of 221B Baker Street who chronicles his room-mates exploits as a hobby. But to a Central Illinois Sherlockian who might otherwise be mowing his lawn or playing World of Warcraft on the computer, it wasn’t half bad.

Your humble correspondent,
Brad Keefauver
at June 04, 2018 No comments:

No man can resist the power of the hansom cab clock!

Today another Sherlockian, my friend Hobbs himself, succumbed to the lure of that aged artifact of no direct Holmes significance, as so many others have before him. These things have such an attraction that one almost pictures a hansom cab clock sitting atop a delicately balanced stone pillar in an ancient ruin, waiting for Indiana Jones to tuck it under his leather jacket and run away from a giant boulder to get it back to civilization.

The first hansom cab clock I ever encountered was found by my neighbor, Bob Burr, at a garage sale not far from his home here in Peoria. As the leader of our local scion society, the Hansoms of John Clayton, the idea of a faux-bronze hansom cab appealed to him immediately, and he bought it and took it home to his mantle. The little streetlight next to the two-wheeled cab, and the coachman's whip-arm would mechanically whip up his mare, just like John Clayton himself did in The Hound of the Baskervilles. 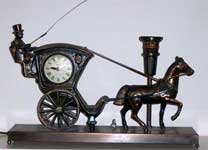 The hansom cab clock seemed was a remarkable find, and every Sherlockian who came through Bob's house back in the eighties remarked upon it, and many vowed to find one of their own. Even though it had no image of Sherlock Holmes riding in the cab, the hansom cab is such an evocative vehicle to the true Sherlockian that the clock almost seemed like it could almost have been merchandising for Basil Rathbone's The Adventures of Sherlock Holmes (remember Bas wrecking a hansom in that one?). But it seemed like such a rarity -- could such antique lightning ever strike twice?

Well, years passed and Bill Cochran, Occupant of the Empty House, former editor of The Baker Street Journal, and a good friend of Sherlock Peoria, was wandering a fairground flea market in Southern Illinois with his wife, saying, "You know what I wish I could find? A clock shaped like a hansom cab, like that one Bob Burr has." His wife, who was facing a different direction, said, "You mean like that?"

And there it was . . . the second hansom cab clock.

Now that two of these treasures had been found, it was only a matter of time before a third showed up, and a friend of mine in Denver named John Holliday greeted me on a visit with a gift: yet another hansom cab clock, found in the west.

Suddenly the world seemed booming with hansom cab clocks, and it was John Holliday who eventually discovered the reason why. For entertainment one evening, John was perusing a Sears catalog from the early 1960s, and . . . well, apparently there were once enough hansom cab clocks that you could order one from your local Sears store or catalog outlet!

The hansom cab clocks were made by United Clock Corp. of Brooklyn, New York, their Model No. 701 (With Lights On) -- apparently United Clock Corp. was famous for its novelty clocks. Clocks with golfers, clocks with Uncle Sam, sailing ship clocks . . . United Clock Corporation seems to have put clocks in just about everything. You almost have to wonder if they did a Sherlock Holmes clock at some point. But since the actual clock of the hansom cab clock obscures the cab's passenger, until such a clock is discovered, we Sherlockians may have to settle on Model 701 as United Clock's most Sherlockian item.

After all, we don't know that Holmes isn't riding in that cab, do we?

Adding Don Hobbs to the roll, the Secret Society of Sherlockian Hansom Cab Clock Owners (so secret that even the members don't know that they're in it!) now numbers at five, to my knowledge, but I bet there are more members out there.

Because no man can resist the power of the hansom cab clock!

Ghosts from the past

From 2002 to 2012, Sherlock Peoria was it's own standalone vanilla HTML website that eventually came down for reasons entirely too trivial to get into here. In that decade however, many things I placed on that site seemed to be worth continued existence on the internet, like the chronology of cases, which has since found a new blog home.
Other bits, like the Hansom Cab Clock Club's origins and data on that clock so many Sherlockians enjoy, seemed like they could use a rerun at this point. And so Sherlock Peoria Reruns came into being, for just that purpose.